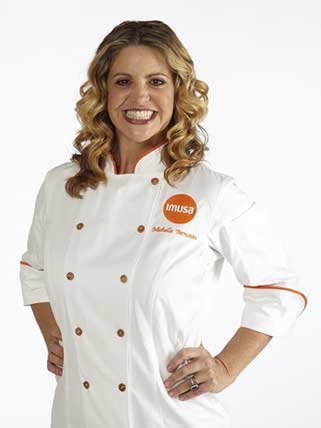 Chef Michelle Bernstein, a Miami native of Jewish and Latin descent, has dazzled diners and critics alike with her sublime cuisine and a personality as bright and vibrant as the Florida sun. “My food isn’t heavy handed or unnecessarily complicated,” says Bernstein, a James Beard Award winner (Best Chef South 2008) and author of Cuisine a Latina (Houghton Mifflin Harcourt 2008).  “You don’t need heavy handed technique and over the top presentations to make a dish work. It’s about amazing ingredients, layered flavors and simplicity. My style of cooking is inspired by my own food memories and it’s the simple, soulful cooking that I remember from my travels. I cook the food I love and I think that love translates to the diners.”

These days, Bernstein is busier than ever. In collaboration with the renowned restaurant and entertainment collective – KNR  Hospitality – Bernstein (and her husband/business partner David Martinez) are overseeing the food & beverage program at Thompson Miami Beach. Among the many elements is Seagrape, an “old Florida” style brasserie for which local farmers are growing unique  fruits and vegetables. Bernstein has also created a menu for the 1930’s House which includes crudo centric small plates.

In addition, with Martinez, the chef owns/operates MBC Michelle Bernstein Catering Company, a full-service catering company as well as her wildly popular café concept, Crumb on Parchment. After closing almost ten months and undergoing a complete renovation, Michy’s, the couple’s landmark restaurant has reopened as CENA by Michy with a completely new look, new menu concept and new spirit. The menu at CENA (loosely translated from Spanish as “the main meal of the day”) is be approachable yet adventurous, boasting just the right amount of soul-pleasing favorites as well as an array of dishes inspired by Bernstein’s current culinary obsessions.

Beyond her restaurants, Bernstein dedicates time to Common Threads, an after-school program for underprivileged kids, and  regularly appears on an array of national TV shows, from Top Chef to Good Morning America. Bernstein also hosts the Emmy award- winning PBS weekly television series, Check, Please! South Florida. In addition, she recently signed as the host for the new weekly TV series on Channel 10, SoFlo Taste, that celebrates the food of South Florida.

Most recently, Bernstein partnered with American Express to create the menu for the new Centurion Lounge at Miami International Airport. Bernstein consults for Delta Airlines, Nespresso and Ruinart. Recently. She partnered with Memorial Cancer Institute (MCI), a part of Memorial Healthcare System, to provide oncology patients with a variety of food alternatives to help ease their  way through treatment. In addition, Bernstein is a part of IMUSA’s panel of chef ambassadors and a member of Macy’s Culinary  Council and Lexus Culinary Masters.