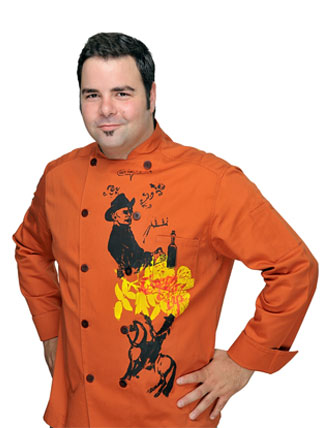 George Duran is a chef and entertainer. Author of Take This Dish and Twist it and host of TLC's Ultimate Cake Off. Duran was born and raised in Venezuela, the son of Armenian immigrants.

With such a diverse background, when it came time for college—New York City seemed the obvious choice. So Duran left his beloved Caracas (and more importantly, his beloved mother's home cooking) behind to attend New York University, where he majored in Communications Studies (and minored in begging his mother to send Care Packages of her home cooking). There, he commenced his all-out assault on a career in radio and TV production, culminating in 1996--with an award for Best Radio Talk Show at the National Association of College Broadcasters for his work hosting HYE Time Radio show on WNYU.

Post college, Duran continued to follow his Radio Muse, working as an on-air personality for comedy segments at WPLJ-FM in New York. He moved on to WABC radio in 1999 where he produced and performed more comedy sketches.

In 2000, Duran told his Radio Muse he'd like to "take a break" and after a stint in production on the popular MTV show, House of Style, George moved to Miami—and the Latin music television station HTV—hosting such shows such as the Top 21 Videos of 2001 and Pachanga!

2002 proved to be an important year for Duran. Since man cannot live on care packages from Mom alone, George had been busy honing his own culinary skills—and found his hobby gradually turning into a full-blown obsession. One he would follow to Paris, France, where he attended culinary school at the Ecole Superieure de Cuisine Francaise, Groupe Ferrandi. While attending school, Duran created and hosted in French a culinary show called Pop Cuisine on France's Cuisine TV network. His unpretentious, quirky culinary style was a hit—garnering Pop Cuisine a nomination for a 7 d'Or (French Emmy) for Best Cable Show as well as a 2003 Silver Grape Gastronomic Award. George even broke into the world of print, teaching Gallic "lads" a few culinary tricks with his column in the French edition of FHM magazine.

In 2005, Duran returned to New York, taking his career as a TV Chef to the next level—creating and hosting Food Network's popular Ham on the Street. The program showcased George's keen interviewing and culinary skills—and determined once and for all that you can't fry a fudge-cicle. In February 2007, Duran expanded his presence on Food Network, hosting The Secret Life of…, a light hearted exploration of the history of the foods we love.

In October, 2008, George's first book, Take This Dish and Twist It hit bookstore shelves. As colorful and funny as the chef himself, Duran's book is packed with highly useful tips, extremely amusing anecdotes—and of course, obscenely mouthwatering recipes, revealing his delectably unexpected take on comfort food. This year George was asked to join TLC's prime time line-up by hosting Ultimate Cake Off where the nation's top cake artists compete against each other to build the ultimate cake. Duran's interests lie in French, Armenian and South American cuisines as well as cinematography and video editing. He currently lives in Long Island City, NY. For further information check out http://www.georgeduran.com.